“A great performance! The audience was mesmerized.  Peter was a pleasure to work with.”
Spring Weekend, Brown University

“Stupendous! We look forward to having you back.”
Fairfield University

“The enthusiastic laughter and applause was all we needed to hear…Your show truly appeals to all ages.”
Bryant University

Hypnotists have long been a campus favorite and now it’s even easier to know which one to invite to your school.

Get Hypnotized! is flexible, interactive, and campus-tested. Peter is experienced, responsible, and easy to work. All you have to do is set up a row of chairs, hand him a microphone and sit back and watch the fireworks!

Peter’s appearances often sell out and at 90 minutes, Get Hypnotized! is a night out, all by itself. 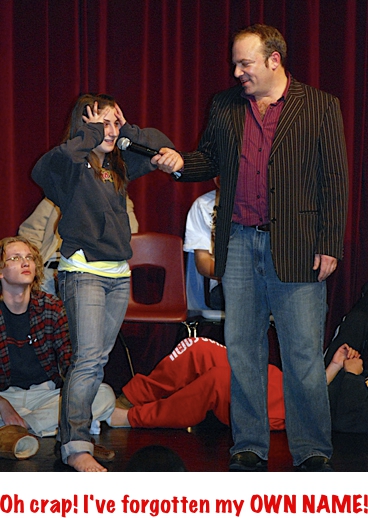 “Peter’s performance was wonderful. It was full of laughs and fully entertained everyone who watch (including the adults). The kids are still talking about it and ask if you’ll be back next year.”

Here are just a few of the communities and schools who have hired Peter again and again, to keep their kids entertained and safe (asterisks show return bookings):

Peter has been seen in theaters, comedy clubs and on festival stages across the world. He’s been invited to the White House, performed at the Kennedy Center, Canada’s National Theater and has made numerous TV appearances. He has been invited to perform in Germany, Spain, Scotland, and Japan. He also won two silver medals at the Oranjeboom International Variety Performer’s Competition in Rotterdam, Holland.

“You were spectacular! Our audiences raved. Our staff raved. And I was raving mad that I missed it. “  — Actor’s Theatre of Nantucket

Peter’s extensive cruise ship contracts for companies including Royal Caribbean, Princess, Carnival, and Celebrity Cruise lines have taken him to far flung ports including Tierra Del Fuego, Tahiti and Vladivostok, on the far east coast of the former Soviet Union.

In the US, Peter has performed on college campuses including Harvard, Brown and Yale and for Fortune 500 companies including McDonald’s, Microsoft, Intel, Bain Financial, Ecco Footware, Prudential Bache and General Dynamics.